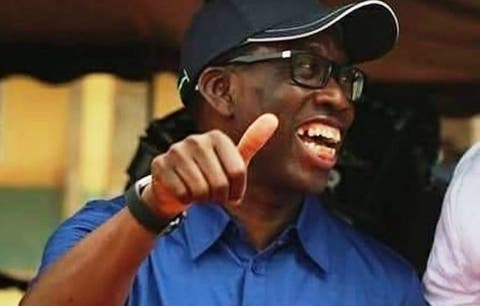 Nothing says “adept” like an individual who is efficient at multiple vocations, hobbies and lifestyle. Dressing, especially, is an area that has always testified to an editorial personality – particularly with the greater percentage of men, who would rather throw on what is clean rather than be attired in trending, second-peek enabling garbs. Thankfully, there are a few of those who have managed it rather well, lending colour and style to a demanding profession or vocation.

The Executive Governor of Delta State, Dr. Ifeanyi Arthur Okowa is a case in study. Hailed as one of the most stylish of the 36 governors of the Nigerian federation, Governor Okowa has never disappointed when it comes to dressing. With a predilection for red caps, he has doubtlessly entered into history books possibly as the most distinguished Governor of his time.

Aside the red caps, one other enduring feature of Okowa’s public wardrobe is the traditional attire that he never seems to run out of. Never caught unfresh or unfitting, this traditional clothing style has always lent a down-to-earthness to his already charming and soft personality. Stylish to the bone, with a confident gait and designs copyrighted to him, the Deltan man walks the line between enviably eccentric and matchlessly magnetic.

His career choices have been about as superb and trendy as his style. A star from the very beginning, Okowa graduated from the University of Ibadan at the age of 22 where he studied Medicine and Surgery. It did not take too long for him to enter private practice as the Director, Victory Medical Centre, Igbanke.

Enrolling in politics, Dr. Okowa rose from the ranks of humble Secretary to the Ika Local Government, to the humble Governor of Delta State that is widely known and beloved today. All in the space of little over two decades.

Governor Ifeanyi Okowa has proved time and time again that the portfolio of governorship does not include dour-looking attire designed to throw onlookers off – unintentionally and not in a good way, although remarkably effectively. Dress in style, preferably with homemade design and designers, and there is only passionate loyalty and approval waiting outside.

We learnt that a Delta born designer is in charge of his wardrobe , Okowa is a beacon of hope and a model for aspiring leadership.

Governors of the 19 states in the North have opposed the call by their southern counterparts that the Presidency should be zoned to the South in 2023. This formed part of the resolutions reached on Monday when the governors held an emergency meeting with traditional rulers END_OF_DOCUMENT_TOKEN_TO_BE_REPLACED

Gunmen on Sunday reportedly attacked some members of the All Progressives Congress (APC) in Nnewi North Local Government Area of Anambra State, killing one of its members. DAILY POST gathered that the party members were holding a meeting of Uruagu Ward 3, in preparation for END_OF_DOCUMENT_TOKEN_TO_BE_REPLACED

The Zenith Labour Party Gubernatorial candidate in the forthcoming Anambra Governorship election, Dr Obiora Okonkwo has stated that he is ready to attract a minium of 10billion dollars worth of Direct Foreign Investment to the State from Russia if elected. The Anambra state gubernatorial hopeful END_OF_DOCUMENT_TOKEN_TO_BE_REPLACED