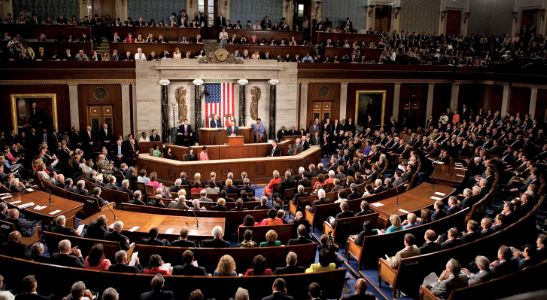 THE US House of Representatives is set on a fresh course of collision with President Donald Trump, this time over the Friday restriction of immigrant visa against Nigerians and nationals of five other countries.

Speaker Nancy Pelosi said on Saturday that the new policy smacked of discrimination and undermined the US global leadership, constitution and heritage.

The House, according to her would soon establish a “no ban act” against the immigrant visa ban which also targets nationals of Myanmar, Eritrea, Kyrgyzstan, Tanzania and Sudan.

She spoke as President Muhammadu Buhari set up a committee to study and address the travel restriction against Nigerians.

Pelosi, in a statement yesterday said: “The Trump Administration’s expansion of its outrageous, un-American travel ban threatens our security, our values and the rule of law.  The sweeping rule, barring more than 350 million individuals from predominantly African nations from traveling to the United States, is discrimination disguised as policy.

“America’s strength has always been as a beacon of hope and opportunity for people around the world, whose dreams and aspirations have enriched our nation and made America more American.  With this latest callous decision, the President has doubled down on his cruelty and further undermined our global leadership, our Constitution and our proud heritage as a nation of immigrants.

“In the Congress and in the Courts, House Democrats will continue to oppose the Administration’s dangerous anti-immigrant agenda.  In the coming weeks, the House Judiciary Committee will mark-up and bring to the Floor the NO BAN Act to prohibit religious discrimination in our immigration system and limit the President’s ability to impose such biased and bigoted restrictions.  We will never allow hatred or bigotry to define our nation or destroy our values.”

President Muhammadu Buhari constituted a committee to study and address the situation.

His Special Adviser on Media and Publicity, Mr Femi Adesina, said the committee is headed by the Interior Minister Rauf Aregbesola.

The committee will work with the US authorities, INTERPOL and other stakeholders to ensure the proper implementation of the decision.

The statement also explained the diplomatic decision, which was taken against Nigeria and five other nations, applies the suspension to the issuance of immigrant visas, clarifying that other forms of visas are not affected.

It, however, reassured of Nigeria’s readiness to continue to collaborate with the United States and its allies, especially when it concerns global security.

“For Nigeria, the restriction is the suspension of the issuance of ‘immigrant visas’ to Nigerian passport holders only. This suspension shall come into effect on 21st February 2020. The suspension does not apply to other U.S visas such as those for official, business, tourism and student travel.

“The DHS states the suspension of ‘immigrant visas’ became necessary following a review and update of the methodology (performance metrics) adopted by the U.S Government to assess compliance of certain security criteria by foreign governments. This resulted in certain enhancements on how information is shared between Nigeria and the U.S.

“Nigeria remains committed to maintaining productive relations with the United States and its international allies especially on matters of global security.

“Accordingly, President Muhammadu Buhari has established a committee, to be chaired by the Minister of Interior, to study and address the updated U.S. requirements.

“The committee will work with the U.S Government, INTERPOL and other stakeholders to ensure all updates are properly implemented.”

He said Washington should rather restrict the ban to officials of the Nigerian government responsible for actions that warranted the ban.

He urged the US authorities not to punish the Nigerian people for the inadequacies of their leaders.

In a statement he personally signed, Atiku said he received  “with sadness the policy of the government of the United States of America to place Nigeria on its travel ban list.”

He said “While I understand the reasons given by the Trump administration (the failure of the Muhammadu Buhari led administration to share information and to address issues of terrorism), the ban does not take into account the pro-American sentiments of the Nigerian public and the solidarity previous Nigerian administrations have had with the United States.

“I urge the government of President Donald Trump to consider the history of US-Nigerian relationships. Nigeria was one of the few African nations that joined the US led coalition during Operation Desert Storm in 1990-1991, when the United States championed the liberation of Kuwait.

“The Trump administration may also consider the pivotal role Nigeria, in partnership with the US, played in bringing peace to Liberia, an American sphere of influence, that now enjoys democracy because Nigerian blood and money paved the way for peace in that nation.”

Atiku also recalled how Nigeria has consistently voted in support of the United States and her allies at the United Nations and other multi-lateral world bodies.

He reminded the US of Nigeria’s position as America’s biggest trading partner in Africa, even where Nigeria had alternatives.

“Nigerians are also the most educated immigrant community in America. Surely, the US stands to benefit if it allows open borders with a country like Nigeria that is able to provide skilled, hardworking and dedicated personnel in a two-way traffic.

“The current Nigerian administration may have its deficiencies and deep faults, but the Nigeria people ought not to be punished for their inefficiencies.

“Once again, I call on President Trump to consider adopting measures that individually target those in government who have failed in their duties, rather than target the entire Nigerian population.”

By Eric Ikhilae, Abuja The Supreme Court has reversed disqualification of Chukwuma Francis Ibezim as candidate of the All Progressives Congress (APC) in the December 5, 2020 by-election in Imo North Senatorial District of Imo State. In a unanimous judgment on Friday, the apex court END_OF_DOCUMENT_TOKEN_TO_BE_REPLACED

By Alao Abiodun Minister of Communications and Digital Economy, Isa Pantami, has alleged forces against the Federal Government’s compulsory policy on National Identification Number (NIN) registration for all Nigerians and those residing in the country are behind recent attacks against him. Pantami in an exclusive END_OF_DOCUMENT_TOKEN_TO_BE_REPLACED

Zulum No fewer than 18 persons were killed and 21 injured when Boko Haram insurgents attacked Damasak town in Borno state on Tuesday. This was confirmed during a visit to the town by Governor Babagana Zulum in Damasak, who slept in the town from Thursday to Friday.   Zulum had travelled alongside Senator END_OF_DOCUMENT_TOKEN_TO_BE_REPLACED