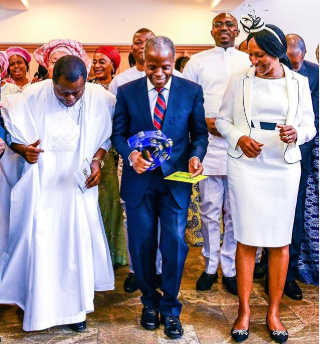 Vice President Yemi Osinbajo today Februrary 2nd, had a thanksgiving at the Aso Villa chapel to celebrate one year of surviving a helicopter crash in Kogi state.

Recall that on the 2nd of February 2019, the Vice President and his team, 11 of them, narrowly escaped death after the helicopter they flew in to Kogi state for a political campaign, crashed in Kabba, Kogi state.

Speaking at the thanksgiving service, the Vice President said

“I think that what happened on that occasion was so amazing, so miraculous; 12 of us in a helicopter. The helicopter crashed and not one scratch on anyone of us. That’s just incredible. So, we can only continue to thank God and to praise the Lord Jesus Christ for an awesome deliverance of so many of us.

Can you imagine a situation where you survived a helicopter crash?  I think it demonstrates that God is merciful; God is awesome; he is able to do all things”.

At least 50 travellers have been abducted in Sokoto State by armed bandits, a witness has said. An official of the Sokoto government confirmed the abductions but did jot state the number of victims. The victims were travelling on Sokoto-Gusau road on Sunday when they END_OF_DOCUMENT_TOKEN_TO_BE_REPLACED

By Rasaq Ibrahim, Ado-Ekiti   An eminent lawyer, Aare Afe Babalola (SAN), has cautioned Kwara State Governor Abdurahman AbdulRazaq against reviewing the Supreme Court judgment on the land dispute involving Offa and Erin-Ile. He said the governor lacked the power to undertake such action, adding that END_OF_DOCUMENT_TOKEN_TO_BE_REPLACED

Victor Ayeni   Pastor Tunde Bakare The Serving Overseer, Citadel Global Community Church, (formerly called The Latter Rain Assembly), Lagos, on Sunday, dared an official of the regime of the President, Major General Muhammadu Buhari (retd.), to come after him if the government was offended END_OF_DOCUMENT_TOKEN_TO_BE_REPLACED

The 2021 (season 6) edition of Big Brother Naija (BBNaija) reality show started last night (Saturday 24th July, 2021) and the host, Ebuka Obi-Uchendu introduced the first 11 housemates who are all males. The female contestants were introduced tonight and here is a list of END_OF_DOCUMENT_TOKEN_TO_BE_REPLACED