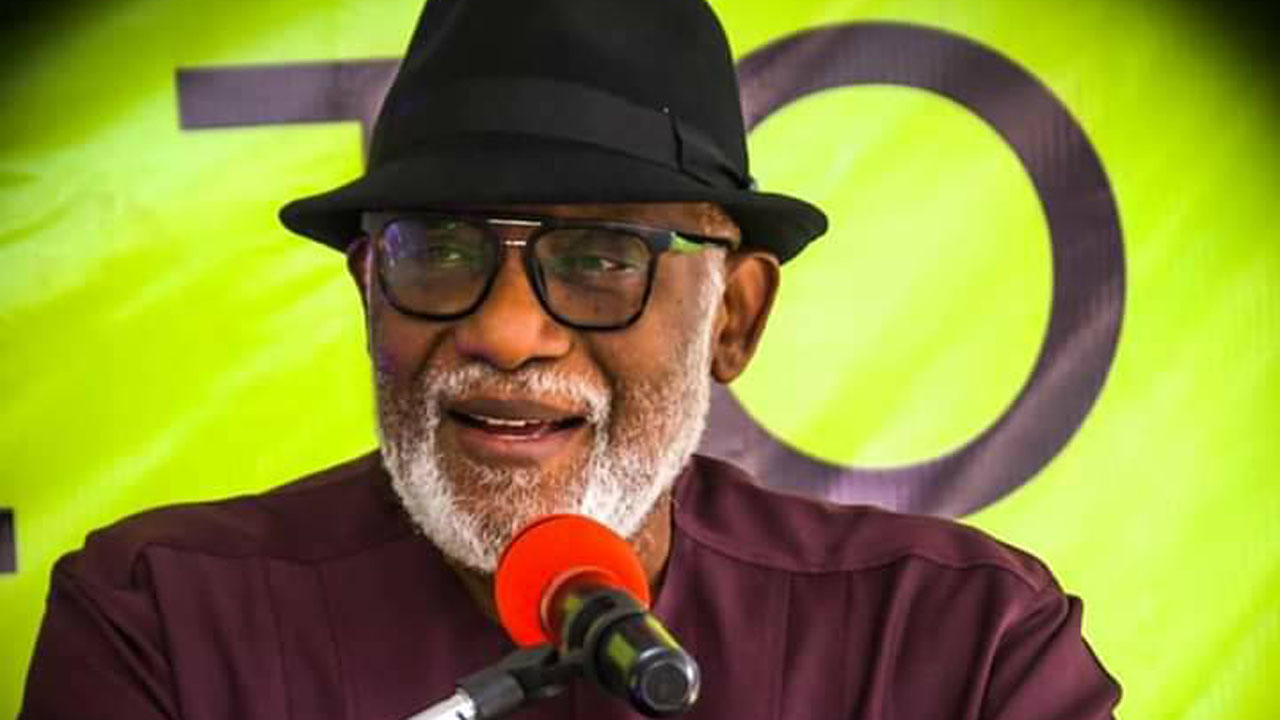 As events unfold, some think incumbent Governor of Ondo State, Oluwarotimi Akeredolu, may find it difficult to pick the second term ticket of the All Progressives Congress (APC).

The greatest threat to Akeredolu’s second term bid is mainly from his party, as many bigwigs, together with their followers across the 3009 units, political influencers in the Southwest and Abuja are beginning to think twice about giving the Governor another four years.

Those who have lined up against him include Chief Olusola Oke, Dr. Segun Abraham, Ajayi Boroffice, Deputy Senate Leader, Dr. Bukola Adetula and the immediate past state chairman of APC, Isaac Kekemeke.

Others are former Deputy Governor and member of APC BoT, Alhaji Ali Olanusi; the NDPHC boss, Engr. Ife Oyedele and Jimi Odimayo, among others.

Worse still, many of his political friends like Banji Ayiloge, his Campaign Director in 2012; Abdulsalam Taofeek, former Speaker and commissioner; Sola Amodeni, who left the cabinet, have all turned lethal foes.

From reliable sources within government, majority of the state cabinet members, especially commissioners, are grumbling over Akeredolu’s leadership style, with many of them expressing displeasure at being reduced to mere “titular office holders.”

As if the internal crisis within Ondo APC was not enough, his position on ‘Operation Amotekun’ has earned him more foes.

The Governor, while addressing journalists on the outcome of a stakeholders’ meeting in Abuja last week, advised the party leadership, that it could lose Ondo State if he was not given the party’s ticket.

He declared he was the only candidate that could win election for APC in the state, hinging his confidence on his achievements, especially regular payment of workers’ salaries, massive infrastructural development, his pedigree and popularity with the masses.

Flaunting his general acceptability on his role as chairman of Southwest Governors’ Forum in the struggle for Amotekun, which enjoys public good will; Akeredolu said Ondo State people would stand by him.

He said: “I didn’t ask to become Governor of Ondo State. The people sought me out to be their leader. As far as I am concerned, power belongs to God and not to any man or leader. It is God that gives power and not any human being.

“That was why I ran and won the primary of the last governorship election in Ondo State without giving money to people, as other contestants did. I can tell you there is no threat or panic whatsoever to my second term election.”

The Governor attempted to demystify the most popular opposition party saying, “there’s no Peoples Democratic Party (PDP) in Ondo State,” and warned, “What I know for sure is that, if APC goes ahead to pick another person as their governorship candidate for Ondo State, the party would lose the state.”

Meanwhile, there have been conjectures that the Governor may dump APC for an opposition party to realise his second term bid. Political analysts linked his likely exit from APC to his involvement with Action Alliance (AA), the platform where many of his allies contested elections last year.

They said Akeredolu might consider AA as an alternative to finish his first term tenure and possibly realise his second term bid, as the APC NWC has reportedly adopted direct primary options for Edo and Ondo States’ elections this year.

Another analysis said the Governor is romancing the immediate past Governor of the state and Leader of Zenith Labour Party (ZLP), Dr. Olusegun Mimiko, to use his party as an alternative, if APC denies him the ticket.

Some ZLP candidates in the last election, who are Mimiko loyalists were given appointments by Akeredolu last year. The two have been long-standing friends since their undergraduate days at Obafemi Awolowo University.

Shortly after Akeredolu won the 2016 governorship election, it was alleged that the PDP candidate and former Attorney General of the state, Eyitayo Jegede, had accused Mimiko of selling out at the poll.

Some political readers believed Mimiko intentionally picked Jegede as PDP candidate to pave way for his friend, Akeredolu and the then opposition party, APC. And just few days ago, a close ally of Mimiko emerged ZLP state chairman.

An APC chieftain and political mobiliser, Mr. Olujimi Adekanle, recently raised alarm that the upcoming April 18 local government election is the brainchild of the former governor, who, according to him, is helping Akeredolu to remain in power till 2025.

He said: “A high political game is about to take place in Ondo State, as Akeredolu is in a secret plan B with ZLP. Watch out for the local government election coming soon, as the plan is to cede some local governments to ZLP as a backup base, should Mr. Akeredolu not clinch APC party ticket.

“The master strategist, who is the former Governor of the state, has penciled down names of preferred candidates for the local governments ceded to the party by the governor.

But the Chief of Staff to the Governor, Mr. Olugbenga and the Speaker of the state Assembly, Bamidele Oleyelogun, dismissed the allegations, describing them as mere rumour.

Oleyelogun, represented by the lawmaker representing Odigbo II, Samuel Aderoboye, at an event to showcase Akeredolu’s achievements, said the Governor is the candidate to beat in this year’s election.

According to the lawmaker, the relationship between Akeredolu and Mimiko should not be misconstrued politically to mean the former is planning to join his party. He said their relationship predates their friendship in the university days.

“Besides, we must not forget that Mimiko is a former Governor of this state, and must also play advisory roles. So, I don’t want people to misinterpret their friendship. It has nothing to do with politics and ZLP,’ he said.

Odimayo has berated his estranged political ally on his comment that the party’s national leadership would raise a candidate against him, urging him to prepare for the direct primary option to test his popularity in the state.

This, however, may not be unconnected to Akeredolu’s alleged involvement in the botched attempt by some governors to oust the party’s national Chairman, Adams Oshiomhole. Indeed, Akeredolu also resisted his emergence as Chairman before last year elections.

Odimayo said: “Akeredolu is a drowning man, who urgently needs the service of a diver in the national leadership of APC to rescue him to stay afloat. But I can frankly tell you that it’s already late for him. He is no longer popular as he has lost every connection with party structures in the state and no longer enjoys any patronage and affection of party leaders and members across the state.

“Rather than going to Abuja to make loud noise to curry undeserved favour from the national leadership of APC, he should come back to his state to canvass for the support of party faithful he has abandoned for three years, and stop throwing stones to bamboozle the party leadership for party ticket…”

Odimayo, who has also shown interest to slug it out with the incumbent this year, recounted: “We all know and recollect what transpired during and after the party primary in September 2016, which fraudulently imposed Akeredolu as the candidate with a slim margin to lead the first runner up, Segun Abraham. The aftermath of that fraud and day light robbery called primary election is what has torn apart the party in the state and scattered it to this level of irreconcilable and fragmented factions.”

Speaking on the Governor’s purported plan to re-contest 2020 election on the platform of another party, he said APC would not only defeat him in the state, but also in his Owo hometown.

“Akeredolu’s threat is an empty one that symbolises the height of ingratitude to APC. In 2016, he could not deliver a single local government for himself, based on his pedigree. Loyal APC members across the length and breadth of Ondo State mobilised for the party’s success at the poll. They delivered for APC because they love APC, not because they knew the party’s candidate. APC practically made Governor Rotimi Akeredolu,” he said.

He implored the National leadership of APC to ignore Akeredolu’s threat.

But the immediate past APC Senator, representing Ondo South District, Yele Omogunwa, flayed Odimayo for his open confrontation with Akeredolu.

He said: “I read a write-up on behalf of Jimi Odimayo and felt that he shouldn’t have taken Aketi to the cleaners, no matter what. I understand he has ambition to be governor. If he intends to take over from him, it shouldn’t be done with hatred.

Omogunwa appealed to Odimayo, who is his kinsman from Irele council, to desist from attacking the Governor publicly and respect his office as the Number One Citizen of the state. He added that fate would decide the next Governor in the state.

However, the leader of Unity Group in Ondo State APC and former Deputy Governor, Olanusi, declared that the party would never miss Akeredolu, if he eventually dumps it to contest in an opposition party.

“The Governor boasted that he is larger and more popular than APC in Ondo State,” he said. “While we take Mr. Akeredolu’s outburst as a mere statement of arrogance, we wish to state that the greatest calamity that can befall APC in Ondo State is to give the party’s gubernatorial ticket to Akeredolu in the coming election. His flaunted popularity lies in the political delusion. The Governor is aware of this fact, and that is why he is struggling to talk himself into relevance on the pages of newspaper.”

The APC chieftain accused Akeredolu of mismanaging the party congress in the state, adding that he equally sponsored and campaigned for the candidates of Action Alliance in the February 2019 elections.

He argued that Akeredolu had suddenly realised the party’s strength and the futility of his attempts to render the party impotent, alleging that he neither accommodates party leaders in the state nor respects party leaders at the national level.

It was, however, gathered that Governor Akeredolu has been making frantic efforts to appease aggrieved party leaders, despite the nonchalant attitude he showed towards peace moves made by the party’s National Leader last year.

According to some political observers in the state, Akeredolu went to sleep for too long, while his political roof was on fire.

They expressed disbelief that he could pacify aggrieved party leaders, who are working hard to raise a consensus candidate against him.

Felix Onajite Delta State governor, Okowa and SSG, Chiedu Ebie Two top officials of the Delta State government have tested positive to coronavirus (COVID-19). The chief press secretary to the governor of the state, Mr Olisa Ifeajika, who made this known in a statement in Asaba on END_OF_DOCUMENT_TOKEN_TO_BE_REPLACED

JOHN ALECHENU and PETER DAVID Ahead of the governorship primary of the All Progressives Congress in Edo State on Monday (tomorrow) the party has dismissed the order gazetted by the state government that political parties must obtain approval of the governor to hold any political gathering. The END_OF_DOCUMENT_TOKEN_TO_BE_REPLACED

The coasts seems clear on Saturday with the clearance of Governor Godwin Obaseki to seek re-election on the platform of his new party, Peoples Democratic Party (PDP). The Hon. Kingsley Chinda-screening committee gave Obaseki a clean bill of health ahead of the PDP primary election END_OF_DOCUMENT_TOKEN_TO_BE_REPLACED

Davidson Iriekpen, Martins Ifijeh in Lagos and Ernest Chinwo in Port Harcourt There may be no respite in sight for Nigerians as far as Coronavirus is concerned if we take what the authorities are saying. Secretary to the Government of the Federation and Chairman, Presidential END_OF_DOCUMENT_TOKEN_TO_BE_REPLACED

Friday Amobi, Port Harcourt These are not the best of times for medical personnel not only in Nigeria but all over the world especially in countries where the global pandemic of Coronavirus is still raging. In some countries they have continued to live in denials END_OF_DOCUMENT_TOKEN_TO_BE_REPLACED