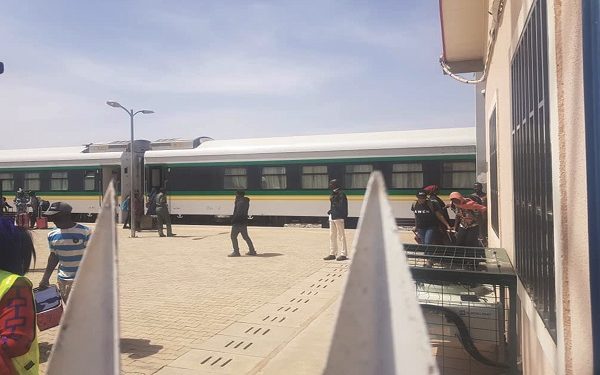 Journey by train has in the last few years saved a lot of people from the hands of dreaded kidnappers on the Kaduna-Abuja Express Way. But, the bandits who seem to have been overpowered by the security operatives on the road lately, have deviced new means of taking train passengers at the teminus. ABDULGAFAR ALABELEWE reports.

The terminus of the Abuja-Kaduna train is located in Rigasa, the western outskirt of Kaduna metropolis and a distance of about 12 kilometers from the city centre.

The railway station can be accessed from Kaduna city either through Rigasa community from the Bakin Ruwa junction of the Nnamdi Azikwe Express Way and through the link road connecting the train station to the Kaduna International Airport and Mando part of the city.

For passengers arriving Kaduna through train, the link road is their shortest route if they are going to places like the Kaduna International Airport, Nigerian Defence Academy (NDA), Kawo, Unguwan Dosa, Malali and Unguwan Sarki parts of the metropolis, as well as those travelling further to Zaria, Kano and other North-Western states,while those connecting Rigasa, Unguwan Muazu, Kabala West, Kakuri, Sabo and Barnawa or travelling further to Kachia and Kafanchan are to use the Rigasa-Bakin Ruwa road.

The Kaduna-Abuja train had gained popularity and became the safest means of travelling to and fro Abuja from Kaduna in the heat of banditry and kidnapping on Kaduna-Abuja Express Way, even though the journey by train is more expensive than travelling by road.

However, following intense security operations on the express way, kidnapping had drastically reduced in recent times, as the perpetrators of the crime appeared to have been given a hot chase by the operatives. The gunmen have apparently spotted a new haven on the road linking the train station with Mando-Airport road.

The bandits operated on the road twice within 24 hours interval last weekend, injuring many commuters and kidnapping a few others.

The Nation gathered that the gunmen attacked vehicles conveying travellers, who just arrived at the railway station first on Friday night. But they succeeded only at injuring commuters and were unable to kidnap any passenger due to the prompt response of the security operatives, who repelled their attack.

An eye witness at train station told our correspondent that the passengers came under gun attack around 9:00pm, shortly after they arrived in Kaduna.

According to the source, who identified  himself as Haliru Musa, “Well, I was not there when they were attacked, but shortly after the attack, we rushed to the scene. By then, the kidnappers had run away.

“It was around 9:00pm because the train arrived around few minutes to 9:00pm. And as usual, people pass through Rigasa road to Bakin Ruwa, but others depending on where they are going, pass through the airport road. We were here because I work here. Suddenly, we saw vehicles that had left the train station turning back and saying kidnappers were raiding.

“I think it was those people that raised the alarm that made security to quickly move in and repel the attack. Because, we rushed to the scene too, but on getting there, the security men had succeeded in chasing the kidnappers away, but they were unable to arrest any of the gunmen.

“So, contrary to reports we  heard, none of the passengers was kidnapped that Friday evening, but some people in the process of trying to run into the bush sustained injuries,” Musa said.

However, barely 24 hours after the security agents repelled their attack, the dreaded kidnappers made a come back to attack another set of passengers on the same spot on Saturday night. Unlike the Friday night attack, some passengers were not lucky; they were whisked away by the attackers.

Another source at the train station, Malam Auwal, told The Nation that, the attackers came more prepared on Saturday.

“In fact, I would have been a victim. I come here to pick passengers by drop. So, that night, I got two passengers who said they were going to Mando, so because of what happened on Friday, I told them I will follow Rigasa road and they became angry that I  would be taking them a longer route.

“They thought I was just trying to charge them high fare. Even after explaining what had happened on Friday to them, they told me there would not be any problem. At that point, I started suspecting that, the two gentlemen were soldiers, but I was still not comfortable taking them through that route because even if they were soldiers, they were at least not carrying guns.

“They boarded another vehicle. I think they even passed before the attack. But, some people were not as lucky.

“I got another set of passengers whom I took to Bakin Ruwa and quickly came back to see if I would get another set before closing finally for the day. But on getting to the train station, I saw a large crowd again. And when I asked what happened, they said people were attacked on the link road again.

“From what people who escaped told us, about four people were kidnapped and some people were injured again,” he said.

We, however, gathered that the family attacked were picked from the train station by their driver and he took the link road where they ran into the attackers, and in the process, three of the occupants of the vehicle were kidnapped by the gunmen.

One of the occupants, a 30-year-old newly wedded groom (name witheld) was shot in the tigh.The groom’s stepmother, one of those kidnapped, was later abandoned at a river bank inside the forest, due to her inability to trek. The woman, who is diabetic, was just discharged from a hospital in Abuja, our correspondent learnt.

A source close to the family told our correspondent that the kidnappers called the family to pick her at the river bank because she was sick and could not trek. “So, the family went there on Sunday and met her.”

He also said that the kidnappers had demanded for N20 million ransom before they will release the remaining two victims.

“As at this Monday morning, they called and demanded for N20 million and threatened that if the family fails to bring the money on time, they will take the victims to Zamfara.

“Even as at this afternoon (Thursday), the kidnappers were yet to reduce the ransom for other victims in their possession. So, it is still N20 million they are asking for.

“As for the man that was shot in the tigh, he has been operated in Abuja and the bullet has been successfully removed from his body and he is now responding to treatment,” said the family source.

Meanwhile, a passenger, who arrived Kaduna around noon on Thursday on board the 10:00am train from Abuja, Mrs. Debby Maxwell, expressed fears that the kidnappers, who chased people from plying the road, are now waiting for them at the train station.

According to her, “When I read what happened here at the weekend in the news, I was shocked to my marrow, because it could just be me. I travel on this train almost on a monthly basis, because my husband works in Abuja, while the children and I are here. I also work here as a nurse. So, when my husband is not coming, I go to Abuja.

“The government should not allow this railway project to be spoilt by these bandits. We use to travel by road; we became scared of the bandits’ attacks on the road. Despite that it is more expensive to use the train, we are still using it, but the same kidnappers are now coming to meet us at the train station.

“For me, I call this an attack on the train, because if you come by the train or you are going to Abuja by the train, you must follow either of these two roads to connect the station. Even though, I live in Barnawa, I have had reason to follow this link road before. That day, I came back from Abuja and normally, I make new friends anytime I travel by this train, so, a friend that I made that day lives somewhere in Kaduna North. Then, on getting to Kaduna, her husband came to pick her and she asked me to join them. And the husband followed Mando road, even though they still took me up to Central Market where I now boarded vehicle going to Barnawa.

“So, if this attack is not curtailed, the bandits will one day dare the security and even invade the train station, just to send signals that even the train is not safe,” Mrs. Maxwell said.

Another passenger, Usman Muhammed, said he had resolved not follow either the early morning or late night train again.

“From the beginning, I had always known that the choice of Rigasa for this important train was wrong. Why not terminate the train at the large expanse of land between Air Force Base and 1 Division headquarters and see who will go and attack passengers there? But, when you choose to bring the station to the back of the town, then you must be ready to secure the passengers up to the town.

“But, as for me, pending the time the security will be ensured, I will not board train that will bring me to Kaduna at night and I will not leave my house very early in the morning going to Abuja by train. I will make do with the afternoon trips for now,” he said.

But, a train station official, who does not want to be quoted, said the station is fully secured, saying that the kidnappers were only lucky to have escaped bring killed by security operatives that Friday.

“If you are a regular visitor to this place, you will see that the station is fully secured. And that road linking Mando-Airport road is usually manned by soldiers. The kidnappers themselves saw fire on Friday; that is why they could not kidnap anybody that day. In fact, some of them must have escaped with gun injuries.

“So, I don’t even want to believe the narrative that it was the same set of kidnappers that came back on Saturday. But, all I can tell you now is that, that road is safe now,” he said.

The All Progressives Congress (APC) in Ward 7, has ratified the expulsion of Mr Elvis Ayomanor, the deputy chairman of the Delta State chapter of the party over alleged anti-party activities arising from his alleged role in the court action instituted against the legitimacy of END_OF_DOCUMENT_TOKEN_TO_BE_REPLACED

Adewale Daniel Jayeoba has been declared wanted by the Economic and Financial Crimes Commission (EFCC) over an alleged investment scam. The EFCC said Jayeoba, a native of Ori-Ade Local Government in Osun State, used to live at Suit 1004, Providence Centre, MKO Abiola Way, by END_OF_DOCUMENT_TOKEN_TO_BE_REPLACED

A casual sex affair ended on a sour note and the police have been brought in. It was meant to be a one-night stand with a man she had met through a ‘hook-up’ app, but Angel (not real name) ended up spending eight days with END_OF_DOCUMENT_TOKEN_TO_BE_REPLACED

GBEMISOLA AJIBOYE Salihu Lukman, director-general of the Progressive Governors Forum (PGF), has explained why some All Progressives Congress (APC) members are against the defection of Femi Fani-Kayode. On Thursday, the former minister of aviation dumped the Peoples Democratic Party (PDP) for the APC and was presented to END_OF_DOCUMENT_TOKEN_TO_BE_REPLACED