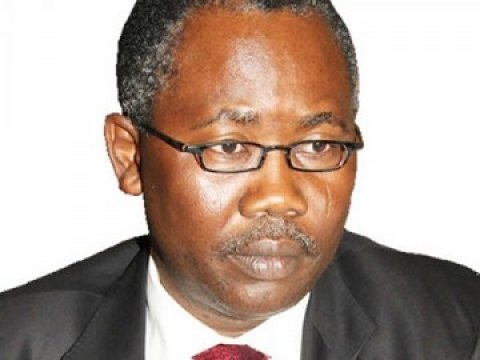 Former Attorney-General of the Federation, Mr Mohammed Adoke (SAN), is still in the custody of the Economic and Financial Crimes Commission (EFCC), 24 hours after he was granted security bail.

A source at the EFCC told the News Agency of Nigeria (NAN), on Friday in Abuja that the former justice minister is being detained at the commission’s headquarters in the federal capital.

Acting spokesman of the anti-graft agency, Mr Tony Orilade, who confirmed the information, said that Adoke was still being held because he had not fulfilled his bail conditions.

“He has yet to fulfill his bail conditions as we speak, hence he still in our custody,” Orilade said, when contacted at 3.55 p.m. on Friday.

On Jan. 23, the EFCC arraigned Adoke in an FCT High Court to answer 42 charges bordering on alleged fraud in the $1.1 billion Malabu oil deal.

He is accused of receiving bribe worth N300 million from Aliyu over the deal for OPL 245, a charge he denies.

On Thursday, the presiding judge, Justice Abubakar Kutigi, granted him bail in the sum of N50 million with a surety who must have a landed property in the FCT.

All sureties must be resident within the jurisdiction of the court, have landed property in the FCT, and must provide evidence of tax clearance for the last three years.

The judge also ordered the defendants to submit their international passports to the court and also sign an undertaking to always attend trial sessions.

The All Progressives Congress (APC) in Ward 7, has ratified the expulsion of Mr Elvis Ayomanor, the deputy chairman of the Delta State chapter of the party over alleged anti-party activities arising from his alleged role in the court action instituted against the legitimacy of END_OF_DOCUMENT_TOKEN_TO_BE_REPLACED

Adewale Daniel Jayeoba has been declared wanted by the Economic and Financial Crimes Commission (EFCC) over an alleged investment scam. The EFCC said Jayeoba, a native of Ori-Ade Local Government in Osun State, used to live at Suit 1004, Providence Centre, MKO Abiola Way, by END_OF_DOCUMENT_TOKEN_TO_BE_REPLACED

A casual sex affair ended on a sour note and the police have been brought in. It was meant to be a one-night stand with a man she had met through a ‘hook-up’ app, but Angel (not real name) ended up spending eight days with END_OF_DOCUMENT_TOKEN_TO_BE_REPLACED

GBEMISOLA AJIBOYE Salihu Lukman, director-general of the Progressive Governors Forum (PGF), has explained why some All Progressives Congress (APC) members are against the defection of Femi Fani-Kayode. On Thursday, the former minister of aviation dumped the Peoples Democratic Party (PDP) for the APC and was presented to END_OF_DOCUMENT_TOKEN_TO_BE_REPLACED