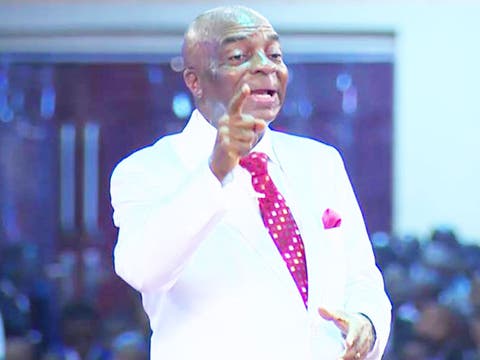 A mild drama, thursday, played out at the Lagos office of the Embassy of the United States as the founder of Faith Tabernacle in Ota, Ogun State and Living Faith Church Worldwide, otherwise known as Winners’ Chapel International, Bishop David Oyedepo was denied visa.

But an ace comedian, Abovi Ugboma, popularly known as Bovi was lucky with the embassy as he was issued the visa.

However, his wife, Kris Asimonye, was not as lucky as she was denied the travelling document.

THISDAHY gathered that the embassy did not give any other reason except the standard default explanation that the Bishop did not qualify for visa renewal in its assessment and urged him to try again.

Heaven was, however, let loose, when the obviously flustered preacher and businessman, created scene whilst querying the grounds for his refusal.

Insider said he told the embassy he had been traveling to the states as far back as 1980s and had not violated any rules or committed any crime to have warranted being denied a renewal of his visa.

According to the source, he immediately sent for his bodyguards to get his phones so he could make some calls, but the embassy allegedly told him he could not make calls within the precincts of the visa-issuing section of the embassy.

When THISDAY contacted the embassy for clarifications on why the popular Bishop was denied visa, a staff of the embassy in the media department, requested that an email be sent with the questions and promised to respond as soon as possible.

Curiously, the embassy, believed to be swift to responding to mails, neither acknowledged nor responded to the email sent since 5.05p.m. yesterday till the newspaper went to bed.

Embassy sources however hinted of the possibility that the popular preacher might have made some calls to individuals that would intervene on his behalf and the visa eventually issued.

In the mail sent by THISDAY, three questions were asked: “One, we understand that there was serious drama earlier today, when Bishop David Oyedepo was denied the US visa. However, because we could verify our facts from other applicants at the embassy today, our question, therefore, is on what grounds was a Bishop Oyedepo, known across the globe, denied a visa?

“Our sources in-house had also hinted that given his connection, the CG might likely be contacted and his visa might be issued eventually through a referral. If that’s true, why deny him in the first place?

We also learnt that the trend of denying prominent Nigerians visa is rampant now, including the Abuja embassy. Is it part of plans to clampdown on Nigerians of a certain category and social status and on what basis?”

At least, five soldiers were reportedly killed by Boko Haram insurgents on Tuesday in Ajiri community, Mafa Local Government Area of Borno State. The incident happened after the visit of the acting governor of the state, Usman Kadafur. A reliable military source disclosed that the END_OF_DOCUMENT_TOKEN_TO_BE_REPLACED

After nearly two months in captivity, students abducted from the Federal College of Forestry Mechanisation, Afaka in Igabi Local Government Area of Kaduna State, regained freedom. Daily Trust reported how 27 students of the 37 abducted from their school dormitories were freed on Wednesday. Their END_OF_DOCUMENT_TOKEN_TO_BE_REPLACED