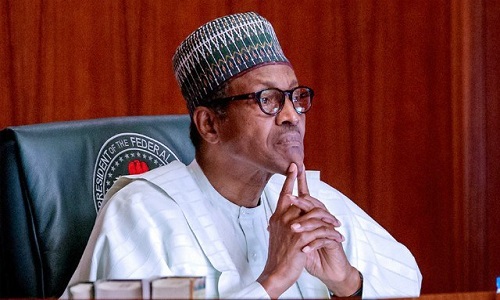 The Presidency on Wednesday attacked Senate Minority Leader Enyinnaya Abaribe for asking President Muhammadu Buhari to resign over rising insecurity in the country.

It described Abaribe as an armchair critic who should be in jail for failing to produce Nnamdi Kanu, leader of the proscribed Indigenous People of Biafra (IPOB), for whom he stood surety.

In a series of tweets last night, Senior Special Assistant on Media and Publicity to the President, Mallam Garba Shehu, said the call did not represent the opinion of Nigerians, adding that if anyone should resign, it should be Abaribe.

Abaribe caused a stir in the Senate during the debate on the worsening insecurity in the country, when he recalled that President Buhari and the All Progressives Congress (APC) told Nigerians during their campaign to stone them if they failed to perform.

The Minority Leader said: “When I was coming this morning, I saw a newspaper headline which read: ‘Commander-in-Chief expresses shock at the level of violent crimes’ in the country.

“In other words, Mr President was expressing surprise but in accordance to our rules in Order 53 (13), I will not go into that but I can only say in Pidgin English ‘this surprise, surprise me.’”

“When you want to deal with a matter, you go to the head, so we will go to the government and ask this government to resign because they can no longer do anything.

“It is now  time to pick stones to stone them in view of their obvious failure.”

At this point, Lawan cut him short. He called on Abaribe and all those who desired to contribute to the debate to be apolitical.

Ahmad said bandits and Boko Haram insurgents do not operate on partisan grounds when they kill citizens.

But when Abaribe regained the floor, he said: “In conclusion, I want to say that Nigerians voted a government into power and that government even said ‘if we don’t perform, stone us’ we are going with the stones to stone them now…”

Again Lawan stopped him and said he (Abaribe) had exhausted the allotted time to make his contribution.

Lawan added: “The situation in this country is such a serious one that our debate should be towards ensuring that we are able to get solutions.”

In his tweets last night, Shehu added that Abaribe was known for making “stray” comments.

“If a leader like President Buhari needs to resign, there are millions of other Nigerians who need to resign, including Senator Abaribe who unlocked the door to enable the escape of traitorous and treasonable suspects.

“He signed the bond for the court to release Nnamdi Kanu (leader of the proscribed Indigenous Peoples of Biafra (IPOB) who is on the run) on bail, from which moment the suspect disappeared into the thin air.

“Senator Abaribe has failed repeated deadlines to return Kanu to the court for trial, yet he has the effrontery with which to accuse someone of failing to the bidding of the law.

“This is a man who should have replaced the suspects he failed to produce in the correctional facility.

“Abaribe’s party raped the nation and left it collapsing in 2015 and President Buhari is fixing things up all the years he is in office.

“President Buhari is working hard to keep Nigeria and Nigerians out of the harm terrorists have unleashed in the entire Sahel and Sub-Saharan Africa with the support of Nigerians and our foreign friends. He is going to finish off these terrorists. He alone can do it.”

He insisted that the Senate President ought to have ruled that Abaribe should withdraw his submissions.

The Senator said: “There is no doubting the fact that we do face security challenges in this country.

“Mr President, if we do not approach this debate with the level of sensibility that it demands, we shall be doing more harm than good to this issue of national security.

“The opening salvo by the Minority Leader where he landed and crash-landed by saying he is going with stones – stone in the spirit in which he made that contribution is a weapon. We cannot sit here as elder statesmen and be adding salt to injury.

“It is not within our duty to do so. I would have wished the Senate President did not to only tell the minority leader that the time allotted for the discussion was up but should have told him to withdraw the statement.”

The All Progressives Congress (APC) in Ward 7, has ratified the expulsion of Mr Elvis Ayomanor, the deputy chairman of the Delta State chapter of the party over alleged anti-party activities arising from his alleged role in the court action instituted against the legitimacy of END_OF_DOCUMENT_TOKEN_TO_BE_REPLACED

Adewale Daniel Jayeoba has been declared wanted by the Economic and Financial Crimes Commission (EFCC) over an alleged investment scam. The EFCC said Jayeoba, a native of Ori-Ade Local Government in Osun State, used to live at Suit 1004, Providence Centre, MKO Abiola Way, by END_OF_DOCUMENT_TOKEN_TO_BE_REPLACED

A casual sex affair ended on a sour note and the police have been brought in. It was meant to be a one-night stand with a man she had met through a ‘hook-up’ app, but Angel (not real name) ended up spending eight days with END_OF_DOCUMENT_TOKEN_TO_BE_REPLACED

GBEMISOLA AJIBOYE Salihu Lukman, director-general of the Progressive Governors Forum (PGF), has explained why some All Progressives Congress (APC) members are against the defection of Femi Fani-Kayode. On Thursday, the former minister of aviation dumped the Peoples Democratic Party (PDP) for the APC and was presented to END_OF_DOCUMENT_TOKEN_TO_BE_REPLACED