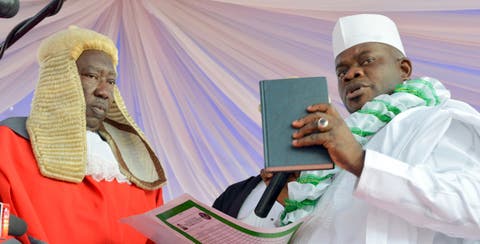 As Kogi State Governor, Yahaya Bello, took oath of office for the second term, he called on all and sundry, friends and perceived foes to put aside all differences of politics, ideology or affiliation and joined hands with his administration in order to provide the state good governance in his second term in office.

Bello, who made the call yesterday in Lokoja shortly after taking the oath of office administered by the state Chief Judge, Justice Nasiru Ajanah, as the fourth governor of the state, assured the people that his second term would bring a revitalised energy in delivering refocused governance, calling on the people to support the government in achieving its ‘laudable programmes’ for state development.

According to Bello, “My primary allegiance as the state governor will remain to Kogi State and its citizens, not to the party or tribe. Everyone is my citizen, and I owe every one the protections and fidelities inherent in the office.

Meanwhile, Bello has announced the names of commissioner-nominees, saying their names would be forwarded to the state House Assembly for screen and subsequent confirmation.

No fewer than 10 governors from the All Progressives Congress (APC) ruling states graced the inauguration of Bello for second term in office, which took place at the Glass House in Government House in Lokoja yesterday.

At least 50 travellers have been abducted in Sokoto State by armed bandits, a witness has said. An official of the Sokoto government confirmed the abductions but did jot state the number of victims. The victims were travelling on Sokoto-Gusau road on Sunday when they END_OF_DOCUMENT_TOKEN_TO_BE_REPLACED

By Rasaq Ibrahim, Ado-Ekiti   An eminent lawyer, Aare Afe Babalola (SAN), has cautioned Kwara State Governor Abdurahman AbdulRazaq against reviewing the Supreme Court judgment on the land dispute involving Offa and Erin-Ile. He said the governor lacked the power to undertake such action, adding that END_OF_DOCUMENT_TOKEN_TO_BE_REPLACED

Victor Ayeni   Pastor Tunde Bakare The Serving Overseer, Citadel Global Community Church, (formerly called The Latter Rain Assembly), Lagos, on Sunday, dared an official of the regime of the President, Major General Muhammadu Buhari (retd.), to come after him if the government was offended END_OF_DOCUMENT_TOKEN_TO_BE_REPLACED

The 2021 (season 6) edition of Big Brother Naija (BBNaija) reality show started last night (Saturday 24th July, 2021) and the host, Ebuka Obi-Uchendu introduced the first 11 housemates who are all males. The female contestants were introduced tonight and here is a list of END_OF_DOCUMENT_TOKEN_TO_BE_REPLACED