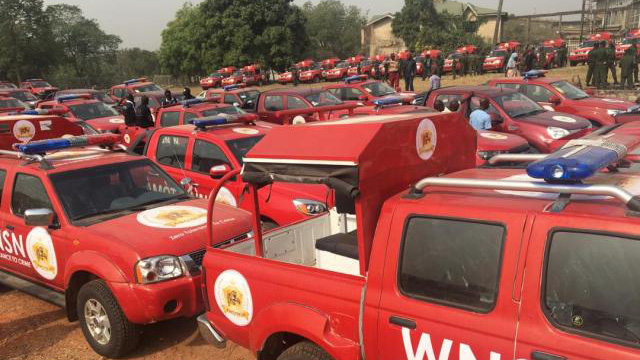 The Middle Belt Forum (MBF) has weighed the formation of its own outfit to address insecurity in the region. The development came on the heels of the face-off between the Federal Government and Southwest governors over the launch of a security outfit codenamed Operation Amotekun by the latter.

Also, one of the apex socio-cultural groups in the Niger Delta region, Urhobo Progress Union (UPU), called on governors in the South-South region, especially Delta State Governor Ifeanyi Okowa to take the lead in organising a security outfit.

MBF National President Dr. Pogu Birtus and UPU President General Olorogun Moses Taiga said governors in both regions ought to emulate their Southwest counterparts with a view to stopping the wave of insecurity threatening their areas.

Bitrus yesterday said Middle Belt governors must be steadfast in evolving measures to stave off further bloodshed in their communities.

He said: “Democracy and right to life is sacrosanct. Therefore, we call on the governors of the Middle Belt zone to be committed to the defence of life and property. We believe that a security outfit like Operation Amotekun would serve our communities better than the proposed community policing, which is similar to the work currently being done by informants in providing intelligence to the police.

“To achieve these laudable recommendations, the governors should carry along critical stakeholders in policy implementation in their respective states towards creating cordial relations and promoting peace and harmony. More than anything, the governors should embark on measures towards engendering development and providing hope for people and communities that are under siege.”

According to Taiga, Amotekun is needed because the police are currently overwhelmed by the prevailing internal security challenges.

“The army has been drafted to help the police in some areas, but we all know that it is not what the army is trained to do. There have been agitations for state police and a better-organised community policing. Amotekun is a response to the current security challenges in the Southwest and is also meant to help the Federal Government address the problems of insecurity,” he said.

Speaking further on Amotekun, the UPU president general cautioned against throwing the baby away with the bathwater. He said that Amotekun was launched to target criminals and not religious or ethnic groups, as some critics have claimed.

“Criminality knows no ethnicity. The Southwest should continue to dialogue with the Federal Government to smoothen the rough edges. The Urhobo Progress Union fully aligns with the ideals of Amotekun.

“The UPU also uses this opportunity to call on the South-South, especially the government of Delta State to study what the Southwest has done and the ongoing dialogue with the Federal Government, to set up a similar security outfit.”

But a former commander of the 31 Airborne Brigade of Paratroopers in Makurdi, General Yakubu Rimdan, described Amotekun as unconstitutional.

“Nobody has the right, the authority to convene or to constitute themselves into a kind of body that will form a kind of force that will counter another force. You cannot form a force in a force unless you are asking for chaos. In any legitimately established operational outfit that has been formed by the government, nobody has the right to go and form any other thing unless you are against the government. Then, of course, government will come out to deal with you. No one has the right to do it,” he said.

The Peoples Democratic Party (PDP), meanwhile, has charged the National Assembly, upon its resumption on Tuesday, to invite President Muhammadu Buhari for questioning on the worrying spate of insecurity in the country.

The party hinged its position on the Global Terrorism Index report by the Institute for Economics and Peace (IEP), which ranked Nigeria as the third country with the highest level of terrorism in 2019, after Iran and Afghanistan.

The PDP, in a statement by its national publicity secretary, Kola Ologbondiyan, yesterday described the report as distressing “particularly as its indices show that insecurity and deaths from acts of terrorism increased in Nigeria in spite of promises by the current administration.”

The party noted that the IEP rating “has further confirmed its position that the security of life and property in our nation has gone beyond what the Buhari administration’s security architecture, as presently composed, can guarantee.

“Our party posits that the issue of security has gone beyond partisan and sectional sentiments as well as propaganda and now requires concerted effort by all stakeholders to compel a review of security structure and method by Mr. President.”

The PDP said: “As a pan-Nigerian platform, it urges the National Assembly to step in by persuading Mr. President to heed wise counsel and rejig his security high command so as to inject new blood to tackle our security challenges.”

The party also urged the National Assembly to compel Buhari to take a decisive step in ordering the apprehension and prosecution of perpetrators of acts of terrorism including the mass killing in Benue, Nasarawa, Bauchi, Taraba, Kogi, Adamawa, Borno, Yobe, Zamfara, Kaduna, Ekiti and other parts of the country.

Also, a retired naval officer and former senator representing Adamawa Central, Abdul-Azeez Nyako, said politicians rather than the military deserved the larger blame for the security challenge in the country.

Nyako told newsmen in Yola yesterday that the Nigerian military was overstretched but it was doing its best and thus deserved commendation.

“The bulk of us (politicians) are providing bad leadership; we are only concerned about the distribution of resources instead of good leadership or how to resolve issues and get our people out of the mess,” Nyako said.

He said if politicians could address the socio-economic challenges that led to the Boko Haram insurgency, kidnapping and other violent crimes, then over 80 per cent of the security challenge in the country would be contained.

Still on security, a former Senate Majority Leader, Mohammed Ali Ndume, yesterday charged the Federal Government to ensure the return of Chadian military forces in the fight against Boko Haram.

He disclosed this in a statement following a suicide bombing on a mosque in Bulabulum ward in Gworza town “within my senatorial district of Borno State.”

In a statement, Ndume, who represents Borno South Senatorial District in the National Assembly, said: “Two women slipped into the mosque pretending to be there for early morning prayer. They detonated the bombs simultaneously, leaving two people dead and 12 others severely injured.”

He said: “I wish to also call on the Federal Government to strengthen the military by ensuring that the Chadian forces, which were withdrawn recently are returned. It has become necessary for the army to redeploy more soldiers to Maiduguri-Damaturu road, which has been notorious for Boko Haram attacks and kidnapping in recent days.”

By Eric Ikhilae, Abuja The Supreme Court has reversed disqualification of Chukwuma Francis Ibezim as candidate of the All Progressives Congress (APC) in the December 5, 2020 by-election in Imo North Senatorial District of Imo State. In a unanimous judgment on Friday, the apex court END_OF_DOCUMENT_TOKEN_TO_BE_REPLACED

By Alao Abiodun Minister of Communications and Digital Economy, Isa Pantami, has alleged forces against the Federal Government’s compulsory policy on National Identification Number (NIN) registration for all Nigerians and those residing in the country are behind recent attacks against him. Pantami in an exclusive END_OF_DOCUMENT_TOKEN_TO_BE_REPLACED

Zulum No fewer than 18 persons were killed and 21 injured when Boko Haram insurgents attacked Damasak town in Borno state on Tuesday. This was confirmed during a visit to the town by Governor Babagana Zulum in Damasak, who slept in the town from Thursday to Friday.   Zulum had travelled alongside Senator END_OF_DOCUMENT_TOKEN_TO_BE_REPLACED