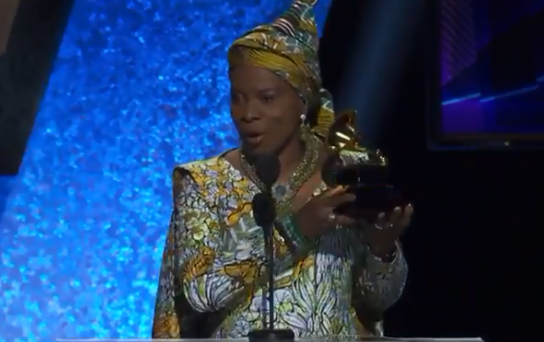 As Nigerians watched the 62nd annual Grammy Awards which held at the Staples Centre in Los Angeles on Sunday night, they rooted for Burna Boy to bring home the Grammy in the Best World Music category for his album, ‘African Giant’.

But this was not to be.

The Afrobeat singer lost to Beninese singer Angelique Kidjo who snapped up the award for her album, Celia.

And in her acceptance speech, Kidjo celebrated a new generation of African artistes.

“Four years ago on this stage, I was telling you that the new generations of artists coming from Africa gonna take you by storm and the time has come,” Kidjo said.

In November 2019, Burna Boy was nominated for the Grammy in the Best World Music category for his album, ‘African Giant’ in race against Altin Gun (Gece), Bokante & Metropole Orkest conducted by Jules Buckley (What Heat), Nathalie Joachim with Spektral Quartet (Fanm D’Ayiti) and Angelique Kidjo (Celia).

The Grammy held on a night which popular NBA player Kobe Bryant died in a helicopter crash along with his daughter, Gianni and seven others. And Grammy host Alicia Keys kick-started the event with a tribute to the late basketball player, activist and philanthropist.

For Burna Boy whose real name is Damini Ogulu, 2019 was a great year as he sold out concerts as raked in money and many awards too.

Presently going by the moniker, African Giant (also title of his new album), in January 2019, Burna Boy dubbed himself ‘African Giant’ when he chided the Coachella Music festival wrote his name in small fonts in the promo poster. Though he still performed at the event, Burna Boy named his album, ‘African Giant.’

Of 2019 Top 10 streamed songs on Apple Music in sub-Saharan Africa, Burna Boy had five songs on the list. His official music video with Zlatan, Killin Dem, was the most trending music video in Nigeria on YouTube for 2019. And he was No. 1 on the 2019 CNN list of Top 10 African artistes.

At the last All Africa Music Awards (AFRIMA), Burna Boy won the Artiste of the Year and Best Male Artist in West Africa for his song, Ye.  This was after he was recently nominated for the 2020 Grammy Awards for best world music album with (African Giant). Earlier in the year, he won Best International Act at the 2019 BET Awards as well as AFRIMMA Artiste, Song of the Year. He also won the MTV EMA, VGMA and the Futures Award this year.

Burna Boy rose to fame in 2012 after releasing his single, Like to party, which was produced by LeriQ. His father managed a welding company and his mother worked as a translator.

Burna Boy was raised in Port Harcourt, Rivers State.  He later moved to Lagos State where he completed his basic education. For his tertiary education, Burna Boy moved to the United Kingdom where he studied media technology at the University of Sussex, from 2008 to 2009.

Members of the Islamic Movement in Nigeria (IMN), Shiites, have asked the Federal Government to immediately release, Sheikh Ibrahim El-Zakzaky from detention custody, after his wife, Zeenah, has tested positive to coronavirus. The Islamic group said that IMN is deeply worried that even six days END_OF_DOCUMENT_TOKEN_TO_BE_REPLACED

By Alex Enumah The Supreme Court for the second time dashed the hope of members of the late Gen. Sani Abacha’s family, following the dismissal of another appeal seeking access to seized funds in foreign bank accounts of the late head of state and some END_OF_DOCUMENT_TOKEN_TO_BE_REPLACED

Seven Nigerian soldiers were on Monday gruesomely murdered by bandits during a rescue operation in a forest along Mararaba-Udege road in Nasarawa Local Government Area of Nasarawa State, PREMIUM TIMES can authoritatively report. The soldiers, who were killed in an ambush by the bandits, were END_OF_DOCUMENT_TOKEN_TO_BE_REPLACED

Sodiq Oyeleke The non-academic workers at Nigerian universities have announced plans to commence an indefinite strike on February 5, 2021. The Joint Action Committee of NASU and SSANU made this known in a communique on Friday. Part of the communique read, “It is in line END_OF_DOCUMENT_TOKEN_TO_BE_REPLACED