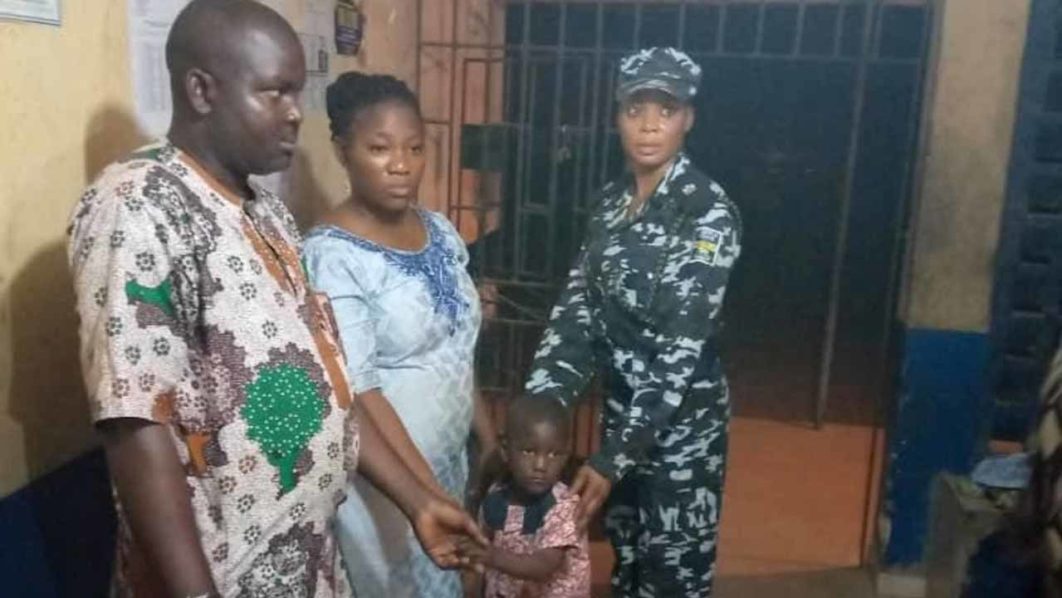 A police officer handing over the boy to his parents.

The arrest of the suspects followed a complaint by the mother of the child, Nimota Adeniran, who reported at Warewa police station that she was alerted by one of her neighbours that her son was sighted with three strange men at Arepo bus-stop along Lagos-Ibadan expressway where they were waiting to board a vehicle.

Upon receiving the information, she started looking for her son only to discover that he was no longer where she left him. On the strength of the report, the DPO Warewa division, Folake Afeniforo quickly mobilized a team of policemen and raced to the bus-stop where the men were said to be waiting to board vehicle.

On getting there, the three men were met with the child in their possession and were promptly arrested with the help of members of the public.

On interrogation, the suspects who claimed to have come from Jigawa State could not give any reasonable account as to why the child was seen with them or why they wanted to board a commercial bus with the child.

The child has since been reunited with his parents while the suspects are undergoing interrogation.

Meantime, the Commissioner of Police, Kenneth Ebrimson, has ordered the immediate transfer of the suspects to the state criminal investigation and intelligence department for discreet investigation and possible prosecution.

The CP advised parents to always take the security and wellbeing of their children serious in order to shield them from those looking for every means to be rich.

The Abdul Samad Rabiu Africa Initiative (ASR Africa) – the brainchild of Abdul Samad Rabiu, Founder and Executive Chairman of BUA Group has today, awarded a N1billion infrastructure grant to the University of Benin (UNIBEN) as part of its 2021 Tertiary Education Grants Scheme. This END_OF_DOCUMENT_TOKEN_TO_BE_REPLACED

BUA Group Founder, AbdulSamad Rabiu BUA Group has pledged the donation of $100m annually to boost research in tertiary institutions across the country. The president of the group, Alhaji Abdulsamad Rabiu made the pledge in Abuja during the 2021 Roundtable for the Development of Federal END_OF_DOCUMENT_TOKEN_TO_BE_REPLACED

The Northern Elders Forum has advised the next political party that will take over the helms of national affairs to prepare itself for a very difficult assignment of fixing the country. According to the forum’s spokesman, Hakeem Baba-Ahmed, the President Muhammadu Buhari’s ruling All Progressive END_OF_DOCUMENT_TOKEN_TO_BE_REPLACED

Zaka Khaliq The Asset Management Corporation of Nigeria (AMCON) has taken over the major investor’s interests in NICON Insurance Limited and the Nigeria Reinsurance Corporation (Nigeria Re). To this end, the Bureau for Public Enterprises (BPE) is working in partnership with AMCON to bring the END_OF_DOCUMENT_TOKEN_TO_BE_REPLACED

The Nigerian government assembled at least six lawyers at the Cour De’Appel De Cotonou, Benin Republic, on Monday, in its desperate bid to secure the extradition of Yoruba Nation agitator, Sunday Adeyemo, more commonly called Sunday Igboho. SaharaReporters learnt that the lawyers, both French and END_OF_DOCUMENT_TOKEN_TO_BE_REPLACED