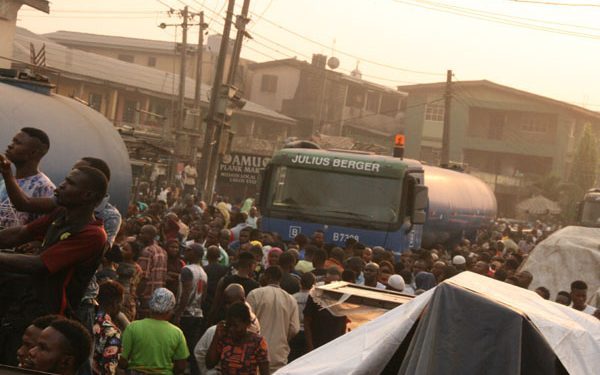 About 18 shop owners were said to have slumped due to the wildfire that razed Amu Timber, a Lagos popular plank market, yesterday morning. The multi-billion naira Amu Plank Market is located at the Amu area, near Olorunsogo Bus Stop, Mushin, Lagos State. Fire incidents were also recorded in other eight areas across Lagos yesterday.

The areas were Ikorodu, Epe, Lagos Island, Apapa, Shangisha, Magodo and Ojota. Residents were divided over when the Amu Plank Market fire started. Amu market is popular stockist of building materials ranging from planks, tiles, various imported doors and paints, among others.

Some said the fire started around 11pm, others gave 12pm. The Nation correspondent counted more than nine burnt houses. Goods worth billions of naira were lost to the inferno. The fire also extended to the popular Kayinsola House and other two houses on Palm Avenue, Mushin. The four-storey Kayinsola House had goods worth over N500 million, according to some workers and neighbours. All shop owners in the main Amu Market, some of whom lived in far places, could not salvage any of their goods

“I don’t trade in the market but unfortunately I live near the market. The wild fire extended to our house around 2am. We did all we could to put it out but got overwhelmed. I have never seen such a raging fire in my life. All our belongings have been lost to the inferno,” a resident, Sola, said. None of those at the scene knew the cause of the fire. “It couldn’t have been from the electric distribution because we don’t use power from either Ikeja Electricity Distribution or Eko Disco. We all use generating sets in this market,” a trader told The Nation.

Some residents lamented that the fire service didn’t respond on time and when their vehicle arrived, it came with half tank water. “It took another one hour before three more vehicles arrived. I think the state fire service could do better,” Femi Akinola told The Nation. Hoodlums took advantage of the people’s fury to attack the officials of the Lagos State Fire Service. One of the fire fighters, who was injured, was rushed to the hospital.

Acting Head of Lagos State Fire Service, Mrs. Margaret Adeseye, blamed the crowd for the delay in putting out the fire. “Our man responded swiftly to the emergency call with a vehicle. On getting to the scene, he called for more support and three additional vehicles were deployed to the scene. But we faced similar challenge of crowd control and traders who wanted to salvage their goods. Our men couldn’t get to the fireplace because forklift drivers took over the way while helping the traders to move their goods out. We had to call on the police to help clear the way before the firefighters could access the place,” Adeseye said.

She condemned the attack on her men during the operation. “People should desist from attacking government officials especially during rescue operations. These acts discourage our men from discharging their responsibilities,” she said. According to the fire service boss, there were fire incidents in Elepe Bus-Stop on Ijede-Ikorodu road, Ikorodu; Glover and Martins in Lagos Island; Terminal Phase I, Kirikiri, Apapa; Kulanla Odomola, Epe, Adekunle Banjo Street, Shangiha; Magodo Phase I, Magodo and Ojota New garage

Director General, Lagos Emergency Management Agency (LASEMA), Olufemi Oke-Osanyintolu, told the News Agency of Nigeria (NAN) that areas affected were Ogba, Agege, Lekki, Ikeja GRA and Mushin. Oke-Osanyintolu said that the response teams arrived at the scene in Mushin at 1:52am yesterday after receiving a call that Amu Plank Material Market was on fire. According to him, the outbreak culminated in heavy explosions of plywood and asbestos materials being stored in the market.

“The Lagos State Fire Service, the Federal Fire Service and LASEMA services were dispatched to the scene. Due to the highly flammable nature of the wooden and polyvinyl materials, the fire continued to rage with intensity. There was no loss of life. Two buildings have been affected by the fire while the main market of about 2,200 m2 with goods and merchandise worth billions of naira had already been consumed in the fire,” Oke-Osanyintolu said.

In a related development, four buildings located at Ogba, Agege, Lekki and Ikeja GRA were also extinguished by the LASEMA Response Team on Friday. “At 16 Ogunjimi Street in Oke Koto, Agege axis of Lagos, we observed that a storey building consisting of a room and parlour was gutted by fire. Preliminary investigations at the incident site (Agege) revealed that the fire started from one of the rooms at the top floor, before spreading to the other rooms. Cause of the fire couldn’t be ascertained.

“Another fire outbreak occurred by Igbo-Efon Central Mosque, close to Chevron, Lekki. According to investigations, fire broke out from a bedroom before spreading to the rest of the house at 1: 30 p.m. on Friday. The collaboration and joint intervention of the LASEMA Response Team, LASEMA Fire Unit and the Lagos Fire Services curtailed and eventually extinguished the fire and refrained from spreading to other adjoining buildings surrounding scene of the incident,” Oke-Osanyintolu disclosed.

LASEMA also extinguished a fire at Oba Akinjobi Close, Ikeja GRA, where it was observed that the fire outbreak occurred at one of the rooms on the top floor of the four-storey building. He said the fire incidents were extinguished by the Lagos Fire Service and LASEMA Fire Unit while the Rapid Response Squad (RRS) secured the entire area during the operations. Oke-Osanyintolu pleaded with the public to always switch off their appliances and avoid anything that could cause an inferno in the state.

Also, the Lagos State Fire Service said it received an emergency call around 6pm on Friday to go to Yaya Abatan by Makunola Street, Ogba, Ikeja, Lagos, where a storey building of 36 rows of shop in open premises of about three plots covering both streets was gutted by fire. The fire which was eventually put out at about 8:40pm by a combined crew of Alausa and Agege fire stations of the State Fire Service with support from the Nigeria Police, Lagos Neighbourhood Safety Corps, among others. The fire, however, severely damaged the 18 shops at the upper floor of the building.

The firemen were able to reduce the damage to other 18 shops due to the intense radiation heat from the fire. Adeseye said no life was lost or injury recorded as the shops were unoccupied as at the time of the fire. The investigation, she said, was ongoing to unravel the curse of the fire while admonishing Lagosians to be safety conscious and quickly report any untold circumstances to the Lagos Emergency Toll-Free Lines 767 and 112 for swift intervention.

Nigerian serial fraudster, Ramon Abass, popularly known as Hushpuppi, has agreed to plead guilty to the money laundering charge against him. Hushpuppi, who is known for his luxury lifestyle, was arrested in the UAE in June 2020 alongside 11 of his associates over allegations bordering END_OF_DOCUMENT_TOKEN_TO_BE_REPLACED

The United Kingdom Parliament has said Nigerians under President Muhammadu Buhari administration are at the mercy of non-state actors who unleash attacks on individuals and communities at will. Members of the House of Lords, the upper chamber of the parliament; Caroline Cox, Rowan Williams, David END_OF_DOCUMENT_TOKEN_TO_BE_REPLACED

Some unknown gunmen, believed to be bandits, have killed the All Progressives Congress (APC) chairmanship candidate for the Kachia Local Government Area of Kaduna State, Alamkah Dominic Usman. The APC leader was shot dead along Keffi-Akwanga road in Nassarawa State on his way to Benue END_OF_DOCUMENT_TOKEN_TO_BE_REPLACED

Daud Olatunji   Men of the Ogun State Police Command have arrested an ex-convict, Jamiu Malomo, for allegedly killing a suspected sex worker, Azeezat Akande, 28. The incident occurred at Ilupeju community, Oke-Aregba, Abeokuta, after the 18-year-old suspect had sex with the victim. The state END_OF_DOCUMENT_TOKEN_TO_BE_REPLACED

Tokyo Olympics 2020 Nigeria’s quest on winning medals at 2020 Tokyo Olympic Games has suffered a huge setback as ten of the country’s athletes are ineligible to compete at the start of the track and field events on Friday in Japan. According to the statement from the END_OF_DOCUMENT_TOKEN_TO_BE_REPLACED