President Muhammadu Buhari has returned to Nigeria from the UK-Africa Investment Summit 2020 which held in London from the 17th of January.

He was received at the Nnamdi Azikiwe International Airport by his Chief of Staff, the FCT Minister, the Inspector General of Police, the Director-General of the Department of State Services, as well as other government officials. 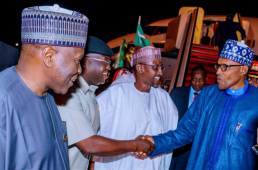 During the trip, the president met with British Prime Minister, Boris Johnson and brought him up to speed with developments in Nigeria.

The Nigerian leader told Mr Johnson about the efforts of his administration in the agricultural sector, saying it has led almost to self-sufficiency in rice and other grains production. 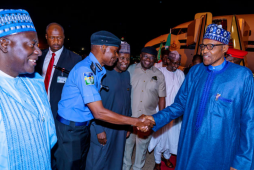 According to him, Nigeria has saved billions of naira in foreign exchange and the efforts are now deployed in other areas of development.

On the war against insurgency, President Buhari said things were a lot better, stressing that the Nigerian government is making efforts to disabuse the minds of the people on the true philosophy of Boko Haram

The United States prosecutors handling the case of Abba Kyari and co-conspirators in the multimillion-dollar fraud masterminded by Ramon ‘Hushpuppi’ Abbas have accused the disgraced police office of being at large. Officials said they would proceed with the trial of three other co-conspirators in the END_OF_DOCUMENT_TOKEN_TO_BE_REPLACED

John Alechenu, Gbenga Adeniji and Olufemi Olaniyi PDP governors Facts emerged on Friday that governors on the platform of the Peoples Democratic Party are gearing up for a meeting on Wednesday to deliberate on wide-ranging issues including the 2023 presidency and other related matters. Saturday END_OF_DOCUMENT_TOKEN_TO_BE_REPLACED

ByYusuf Alli, Managing Editor, Northern Operation and Gbade Ogunwale, Abuja FRESH facts emerged yesterday that intrigues and horse-trading accounted for the Peoples Democratic Party’s delay in arriving at a zoning formula for its National Convention. The Nation investigation revealed that permutations over the 2023 elections have END_OF_DOCUMENT_TOKEN_TO_BE_REPLACED

By Robert Egbe A Lagos State High Court has been asked to exclude a former Miss Nigeria, Helen Prest from benefiting from the estate of the late Dr Tosin Ajayi of First Foundation Medical Engineering Co. Ltd. Dr Ajayi’s widow, Mrs Oluyemisi Ajayi, and her END_OF_DOCUMENT_TOKEN_TO_BE_REPLACED