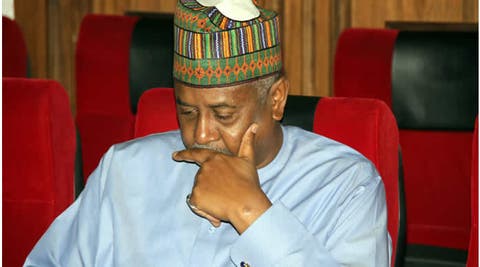 The immediate-past former National Security Adviser, Sambo Dasuki, on Thursday, made his first court appearance after his release from four-year-long detention.

The ex-NSA was kept in detention for that period, in spite of the bail granted him on numerous occasions by various courts, The PUNCH reports.

On Thursday, he appeared before Justice Ahmed Mohammed of the Federal High Court in Abuja for his trial on charges of money laundering and illegal possession of firearms instituted against him in 2015 by the Office of the Attorney-General of the Federation.

The ex-NSA who appeared more relaxed than he looked in his previous court appearances, opted to remain standing in the dock even when the judge offered that he should sit.

There are two separate sets of charges of alleged diversion of funds earmarked for the procurement of arms meant for fighting Boko Haram in the North-East pending against him at the High Court of the Federal Capital Territory in Abuja.

But none of the two other cases had come up since December 24, 2019, when he was released from the custody of the Department of State Services.

At Thursday’s proceedings before Justice Mohammed of the Federal High Court, Dasuki, through his lawyer, Olukayode Ariwoola, withdrew two separate applications which he filed in protest against his continuation of trial without being released from illegal custody.

In withdrawing the applications, on Thursday Ariwoola said they had been overtaken by the event of the release of his client.

Responding, the prosecuting counsel, Mr. Dipo Okpeseyi (SAN), said he had no objection to the request to have the applications withdrawn.

The judge subsequently struck out the applications and adjourned trial till March 11 and 12.

By Eric Ikhilae, Abuja The Supreme Court has reversed disqualification of Chukwuma Francis Ibezim as candidate of the All Progressives Congress (APC) in the December 5, 2020 by-election in Imo North Senatorial District of Imo State. In a unanimous judgment on Friday, the apex court END_OF_DOCUMENT_TOKEN_TO_BE_REPLACED

By Alao Abiodun Minister of Communications and Digital Economy, Isa Pantami, has alleged forces against the Federal Government’s compulsory policy on National Identification Number (NIN) registration for all Nigerians and those residing in the country are behind recent attacks against him. Pantami in an exclusive END_OF_DOCUMENT_TOKEN_TO_BE_REPLACED

Zulum No fewer than 18 persons were killed and 21 injured when Boko Haram insurgents attacked Damasak town in Borno state on Tuesday. This was confirmed during a visit to the town by Governor Babagana Zulum in Damasak, who slept in the town from Thursday to Friday.   Zulum had travelled alongside Senator END_OF_DOCUMENT_TOKEN_TO_BE_REPLACED