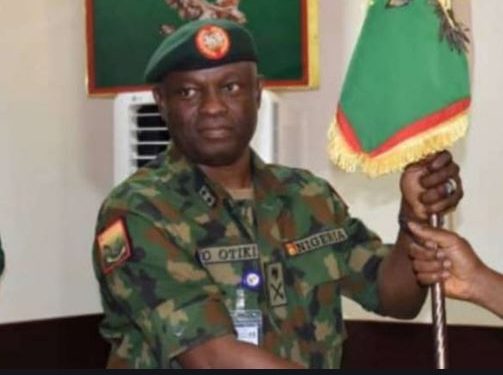 A Federal High Court, Abuja has granted the request by the Economic and Financial Crimes Commission (EFCC) for an interim forfeiture order on the $376, 120 (estimated at about N136,155,440) allegedly seized from Major General Hakeem Oladapo Otiki.

Justice Ijeoma Ojukwu made the order for interim forfeiture of the money ruling on Wednesday, on an ex-parte motion, marked: FHC/ABJ/CS/1380/20 filed by the EFCC and argued by its lawyer, Ekele Iheanacho.

The EFCC stated that Otiki, who is currently standing trial before the Army Court Marshall, detailed some soldiers, sometimes last year, to provide VIP escort from Sokoto to Kaduna for one Alhaji Ado Aliyu, alongside the sum of N400 million, but fled and escaped with the money.

An investigator with the EFCC, Alvan Gurumnaan, stated, in a supporting affidavit, that upon receipt of the intelligence, his team carried out several investigation activities “which include: making inquiries from the office of the Chief of Army Staff, the Central Bank of Nigeria (CBN), commercial banks, Corporate Affairs Commission, Code of Conduct Bureau, Salaries and Wages Commission, interviewing witnesses and suspects with a view to unravel the fraud, tracing the movements of funds suspected to be proceeds of illegal activities, source of the funds, the beneficiaries, amongst others.

The investigation so far reveals the following:

“That Major General Otiki was a serving military officer and the immediate-past General Officer Commanding Division of the Nigerian Army, Sokoto. He was the chief accounting officer of the division.

“That one Alhaji Ado, together with his son, Adamu Aliyu, is into the business of Bureau De Change (BDC). They are business associates of Major General Otiki as they assisted him (Otiki) in operating his BDC business known as Karama BDC.

“The office addresses of the BDC and hotel are respectively in Lagos and Ibadan,” he said.

Gurumnaan said that Otiki was the sole signatory of the bank accounts of the above-mentioned three companies in Jaiz Bank, UBA Plc, FCMB Plc and Access Bank Plc.

The EFCC official stated that despite actively running and managing the businesses as well as being the sole signatory to the bank accounts of the companies, Otiki denied having any enterprise or shares in any company in Nigeria while completing his assets declaration form in 2016.

“To facilitate the above unofficial transaction, Major General Otiki provided detailed military security escort for Alhaji Ado from Kaduna to Sokoto and back to Kaduna.

“That he Nigerian Army Headquarters specifically released special intervention funds to the 8 Division of the Nigerian Army headed by Major General Otiki for the purpose of improving on the infrastructure within the said 8 Division,” he said.

Sheik Abduljabar Nasiru-Kabara Tukur Muntari, Kano THE Kano State Government has fixed Sunday, March 7, 2021, for a debate between the embattled Islamic cleric, Sheikh Abduljabbar Kabara and other Islamic clerics. The state Commissioner for Information, Malam Mohammed Garba, made the disclosure in an END_OF_DOCUMENT_TOKEN_TO_BE_REPLACED

Ted Odogwu  and Leke Baiyewu Salihu Yakasai, the son of an elder statesman, Alhaji Tanko Yakasai, is still in the custody of the Department of State Services. Salihu was arrested by the DSS on Friday after he posted on social media that the All Progressives END_OF_DOCUMENT_TOKEN_TO_BE_REPLACED

Food vendors lament #Afenifere, PANDEF threaten retaliation #No going back unless… – Dealers #We are not part of strike — Southern MACBAN The strike action embarked upon by the cattle and foodstuff dealers under the aegis of the Amalgamated Union of Foodstuff and Cattle Dealers END_OF_DOCUMENT_TOKEN_TO_BE_REPLACED

Food items will not be transported to southwest until Fulanis are safe – Miyetti Allah Coordinator of the Kwara State chapter of Miyetti Allah Association of Cattle Breeders, Aliyu Mohammed, has said that the blockage of cattle and foodstuffs to the South West through Kwara END_OF_DOCUMENT_TOKEN_TO_BE_REPLACED